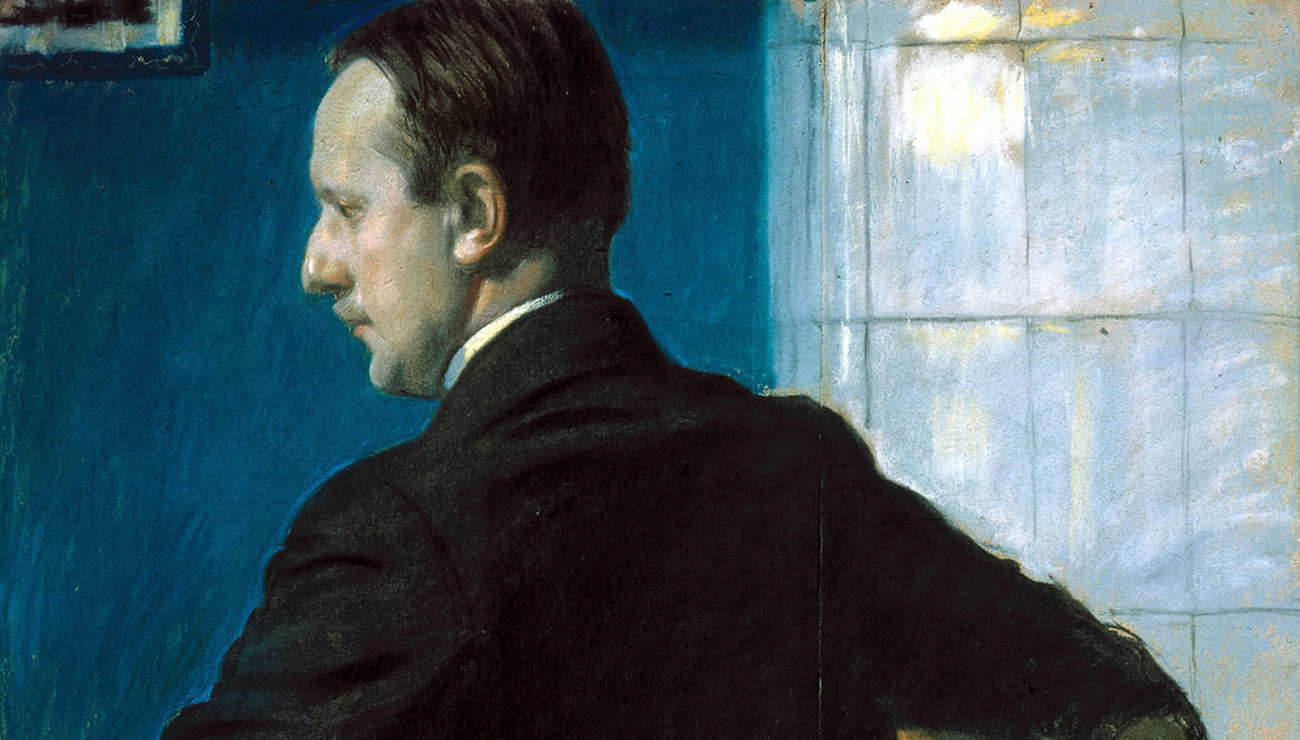 Mstislav Valerianovich Dobuzhinsky was an outstanding graphic artist, a master of expressive line, a great illustrator and book designer, a talented scenographer, a member of  “Mir iskusstva”, a critic, and a memoirist.

Dobuzhinsky was born in 1875 in Novgorod and was raised by his father, Lieutenant General V.P. Dobuzhinsky. He studied at gymnasiums in Kishinev and Vilnius, and later entered Saint Petersburg State University at the law faculty. Dobuzhinsky was trying to enter the Academy of Arts, but without success. The desire to pursue art led Mstislav to the drawing school of the Society for the Encouragement of the Arts. After Dobuzhinsky moved to the studio of L.E. Dmitriev-Kavkazsky, where he remained until 1899.

Dobuzhinsky became seriously interested in art, but at the same time he was disappointed in the academic system, which was experiencing a crisis in the early Twentieth century, so he went to study abroad. Dobuzhinsky studied in the studios of Anton Ažbe in Munich, Simon Hollósy in Hungary. He mastered the basics of graphic art in  Vasily Mate’s studio.

In the early twentieth century, M. Dobuzhinsky began to participate in exhibitions of the Association of Artists “Mir iskusstva” and later became its member. Alexander Benois played an important role in Dobuzhinsky’s creative destiny. Painters were united by their love for St. Petersburg. Conversations about painting, collaborative work in the studio, participation in exhibitions of the “Mir iskusstva” brought the two artists incredibly close.

Dobuzhinsky worked mainly with watercolors, pencils, ink, pastels, less often with gouache and sepia. He also tried his hand at etching, lithography and oil painting. Dobuzhinsky created a lot of portraiture, less landscape, but his main strength is the image of the city. He fixed eyes on houses, streets, nooks and crannies, squares, canals. In Dobuzhinsky’s works there you find a strong desire to reflect the surrounding reality. That’s what makes him stand out among other artists. And if in the paintings of his friends St. Petersburg is triumphant and magnificent, then in the works of Dobuzhinsky St. Petersburg isn’t festive at all. The painter’s contemporaries walk these streets, not characters from the XVIII century. Dobuzhinsky depicts small houses, clamped by tall stone buildings. He created the image of the St. Petersburg landscape of the early twentieth century, which became iconic.

The First World War and the revolution were reflected in the work of Dobuzhinsky in a series “Urban Dreams”. The artist looks anxiously into the future. The world of huge machines and human destinies are mixed in one cycle of hopelessness. In the work “Labor” the spectator is struck by huge gears and a giant ladder, which people walk like ants. The work “The End” is almost apocalyptic. The giant spider keeps in a daze hundreds of people that gathered in a ring around its long legs. The accuracy of the drawing, the sharpness of the tragedy and the power of prophetic thought are impressive.

At the end of 1924 Dobuzhinsky left his homeland. In emigration, he continues to work as a book artist, but has few orders. In 10 years he created four illustrative series and six covers. Among the customers were even Soviet publishing houses. Being in Paris, Dobuzhinsky executed 25 illustrations and a cover for “Three Fat Men” by Yuri Olesha. The book was published in 1928 and in 1929 the artist was awarded a diploma at the All-Russian competition.

In 1980 the V. V. Vereshchagin Mykolaiv Art Museum got from the Moscow collector V.Y. Andreev two illustrations for the fairy tale “Three Fat Men” by Yuri Olesha. “The Death of the Doll” and “Razdvatris on a horse” were made in 1928, in a mixed technique: watercolor, ink, pen.

Dobuzhinsky is close to young readers. He is related to them by the simplicity of perception, capacity of observation combined with ingenuity, rare memory for small details and a touching love of things as living beings. And that’s why there is so much charm and real childhood in his images of the adventures of fairy tale characters. In exile, Dobuzhinsky was engaged in art, book illustration, and collaborated with theaters. The artist lived outside Russia for over thirty years and died in 1957 in New York.